Remembering this time “like it was yesterday” is an understatement. It has played over and over in my mind, like a really bad song that you can't seem to get out of your head. What could I have done different? Why was this the outcome? Why did it take such a tragedy to shake me awake?

This is a story of confusion, loss, sadness, and awakening. It is a story that took me years to honor and ultimately come to love. It is a story of strength and survival. It is my journey, my truth, and if you have come to join me, it means you too may have gone through your own individual journey to consciousness. So, I welcome you.

I was 32 when I became pregnant with my first child. It wasn’t an accident. I decided I wanted a family and nothing was going to stop me from having it. I had always pushed through everything in life, picked myself up, dusted off and moved forward. This was no different. I knew it would be hard, I was also unsure of the level of support I would have from my husband. But I wanted the love of a child so bad in my life that I knew I had to go for it. So I did.

One try, and there it was. I missed my period. It was the first time I had ever bought a pregnancy test. I waited for my husband to get home from work and told him I was taking the test. It was the longest few minutes of my life. As I waited in the bathroom, alone, my anxiety and panic started to overwhelm me. I could barely breathe and felt faint. My body started to shake as the test revealed it's truth. I collapsed on the floor of the bathroom as my life flashed in front of my eyes. It was positive.

I gathered myself together off the floor of the bathroom and picked myself up as I had done many times before. Hating myself for feeling upset about the positive result. I made it into the bedroom where my husband was changing for his run and told him the news. I told him I was really scared, I told him I was worried and needed his support with getting through this. He glared at me from across the room with the emptiest eyes I had ever seen and said “This is what you wanted, now you will have to deal with it”. He stood up and walked out of the room. “It is what I wanted”, I repeated in my head as I fell to the bedroom floor sobbing. Why did I feel like I had made the worst decision of my life? If it was something I wanted, why did it feel wrong? Why did I feel trapped and suffocated? And then the answer came; it flashed across my mind, clear as day. The voice said “you can not do this, get out, save me and save yourself”.

I shook my head vigorously hoping the visions and voices would go away. But the feeling in my being was so strong that I just couldn’t ignore it. That night, as I tried to sleep, the voice became louder. “You cannot do this, get out, save me and save yourself”. I got up in the darkness and walked to my office. My monitor illuminated the room as I started my search. I began to type; G-O-O-G-L-E; RETURN Key. A-B-O-R-T-I-O-N; RETURN Key.

As I searched the internet in the darkness that night, my panic started to lessen. I jotted down phone numbers and doctors and reviews. The voice started to go away and my breathing became calm once again.

The rising sun indicated that I had been researching all night. It was time to shut my eyes and relax before having the conversation with my husband. “I wonder how that will go”, I thought to myself as I drifted to sleep.

It was Saturday when I woke. I walked down the stairs to find my husband sitting in his normal spot. I started talking. I told him everything I was feeling, the research I had done, the options we had... everything. I don’t know why I thought that telling him would comfort me. I don’t know why I thought that he would hold me and tell me everything would be ok and we were in this together. But yet I hoped for it. I waited for it more than anything in the world. Instead, he told me with a cold stern voice “I don’t care either way what you do”. He told me I couldn’t tell anyone, no one could know because I was an embarrassment. He told me that if I decided to continue with the pregnancy my family would have no part of the child's life; my mom and my brothers would not be a part of helping to raise this child. All of these words felt like knives going straight through my stomach. I wanted to throw up. I felt completely alone and the voice screamed at me again “you can not do this, get out, save me and save yourself”.

So I told no one (except for one of my dearest friends) and started calling the places I had researched. (Side note: If you are under the impression abortions are done anywhere and everywhere; I have news for you, they aren’t).

“We don’t do them unless there is something wrong with the fetus.”. “Did your test results come back positive for a genetic disease?”. “We only do them if you are a patient here.”.

Call after call I was rejected. The cold reality is people are not nice when it comes to these matters. They judge, are very harsh, and have no empathy for someone who is “killing a baby”.

After a while, I finally got a hold of a division of one of the major hospitals in Philadelphia that preforms abortions and scheduled an appointment. Up until this point, I was unaware that there was a waiting period to go forward with an abortion. After the hospital confirmed the pregnancy at 6 weeks, PA required a mandatory wait period of 2 weeks to make sure I was of "right mind" before continuing on with the procedure. As if having an abortion isn’t traumatic enough, the waiting is catastrophic to your psyche. Those 4 weeks of waiting were debilitating.

Finally, the day came for the procedure. When I got home, I was emotionally, physically, and mentally exhausted and my body was very confused. My hormones and emotions started to go crazy.

Now in hindsight, I know I must have been suffering from extreme postpartum depression for the months that fallowed my abortion.

Depressed, not eating or sleeping, watching as friend after friend excitingly announce their pregnancies. All while I cried inside and stayed silent; ashamed, guilty and beaten down. I was a failure.

The sadness continued. April passed, when I would have given birth, and I started thinking to myself “why did I do such a drastic thing? This was something I wanted and still want. What was wrong with me?".

So I started on a journey to figure out the truth. I began questioning everything, I started going to therapy to figure out the “why” to my story and eventually, I found my answers. The "why" I unearthed was nothing I had ever expected to find. It had little to do with the abortion and so much more to do with the emotional and mental abuse I was suffering from in my marriage.

I always say "That Baby Saved My Life". Getting pregnant was an awakening for me. It shook me to my core; I could no longer dismiss what was going on nor pick myself up from the abuse I was living with every day.

I left my marriage almost a year to the day after having my abortion.

As I look back now, I know the abortion was the right choice for me. I have come to peace with the decision I had to make for the both of us. In the end though, I know it was that baby who saved my life. Every April, I smile and think of how the child and I saved each other, knowing none of it was in vain.

What I have learned through this whole journey about abortion and the right to choose is this:

Sometimes abortion isn’t about the loss of life. Sometimes it's about saving a life.

Thank you for allowing me to share my story. I hope It shed light on the gray area of this topic.

Not everyones path to pregnancy is straight. Some times that path is messy, with sharp edges and sinkholes. But having choice is a right everyone should have for the health of their own body and mind. I am glad I had the choice.

Love and light to everyone on their own journeys. 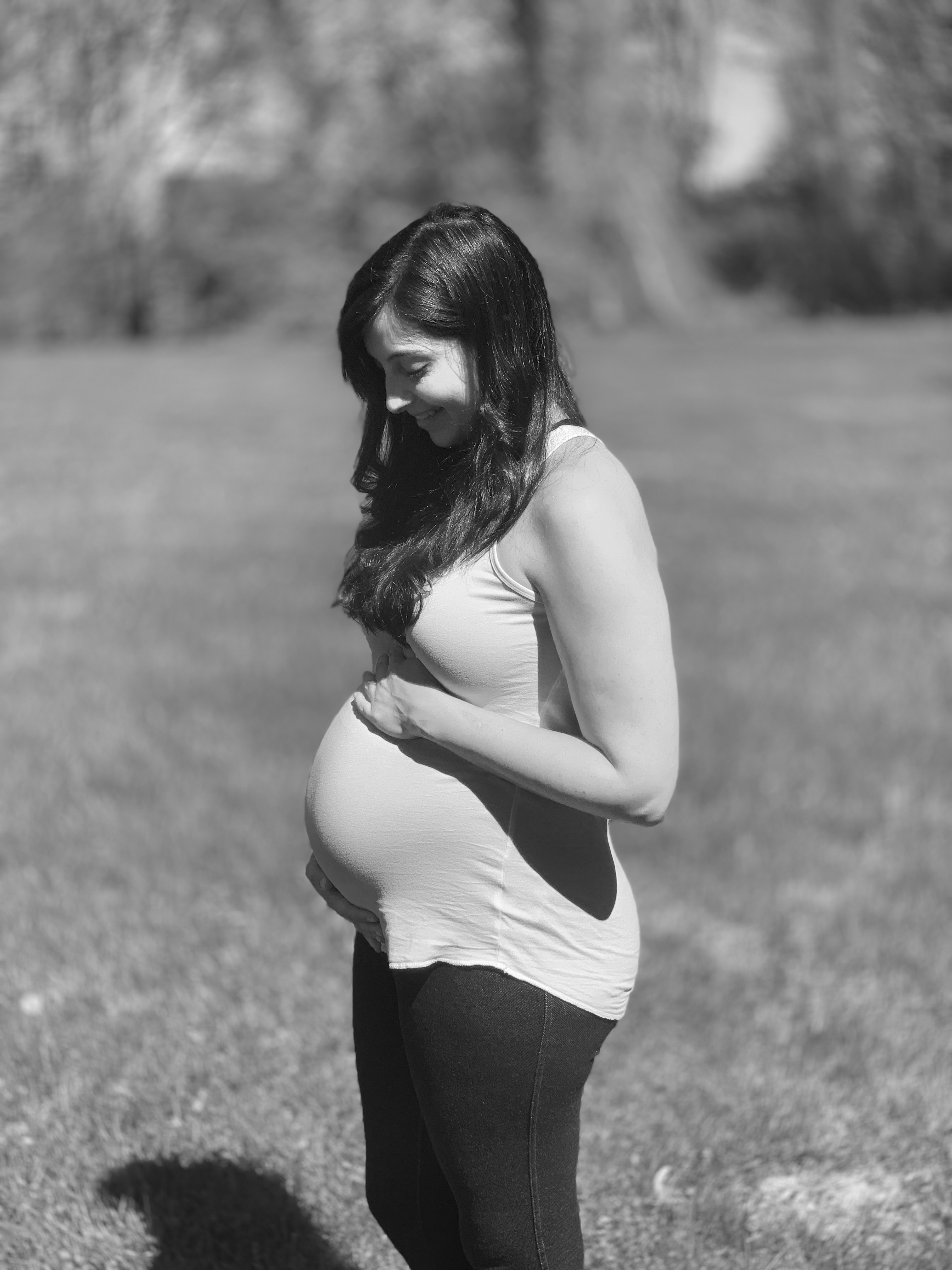 This photo is of me today, happily 33 weeks pregnant. 4 years after my abortion.